When Buildings Learn from our Bodies 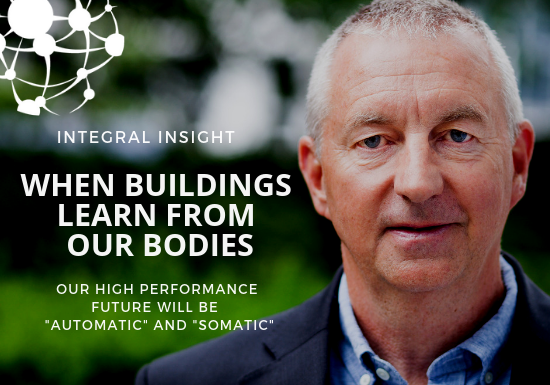 Our high performance future will be “automatic” and “somatic”

Many of humanity’s greatest technological advances and unexpected innovations have happened when engineers drew inspiration from related fields or from the natural world.

The late Owen Finlay Maclaren helped design the Spitfire’s landing gear – and later invented the folding pram by applying his knowledge of lightweight, collapsible structures. Eiji Nakatsu was head of technical development for the 500-series Shinkansen, or bullet train. Faced with the problem of “tunnel boom” that afflicted fast-moving trains entering narrow tunnels, he took inspiration from the Kingfisher, whose elongated beak allows the bird to transition from air to water with precision and efficiency.

The bullet train’s nose-cone design is an example of biomimicry, a concept brought into the mainstream by Janine Benyus in her 1997 book. Janine awoke our curiosity, encouraging designers to look to the genius of nature’s patterns to provide the inspiration for new technologies that could create a healthier and more sustainable planet. Biomimicry draws upon the catalogue gifted to us by the entire natural world, but my own fascination rests with the increasingly close alignment between the design of our own bodies and that of the latest high performance buildings – anthromimicry, I suppose.

There are some easy comparisons to be made between buildings, their component parts and systems, and how you and I function day in, day out. The air handling plant is like our lungs, the facade is analogous to our skin, the building structure to our skeletons, and so on. But dig deeper and the similarities can be far more complex and fascinating. To better understand how this way of thinking has the potential to positively impact our experience of these buildings, we need to explore the difference between ‘autonomic’ and ‘somatic’ systems – terms you might dimly recall from high school biology.