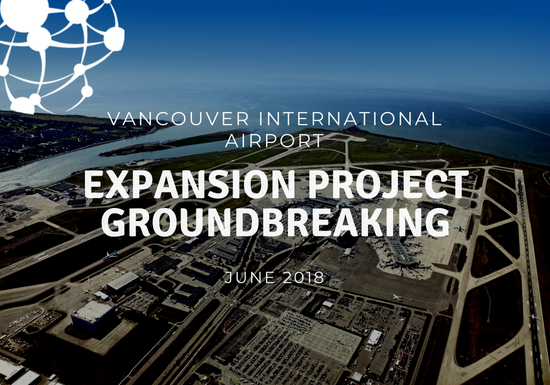 Vancouver International Airport (YVR) had its official groundbreaking for its $9.1 billion expansion being executed over the next 20 years.  This ceremony represented the beginning of the first stage of expansion – the $550 million YVR CORE program.

The event, held on the site of the project, was well attended with Premier John Horgan, CEO of YVR Craig Richmond, and a number of other recognized figures. Many of Integral Group’s partners from Stantec, Francl Architecture and Ellis Don were in attendance as well. Managing Principal, Stuart Hood, Principal, Jason Nelson, and Associate Principal, Gordon Ma from the Vancouver office were present as representatives of Integral Group for the CORE Program design team.

Integral Group is providing mechanical, commissioning and energy modeling consulting to the project. The team will be working towards the improvement, replacement and upgrade of aging heating, cooling and electrical infrastructure to meet the Airport sustainability targets for Green House Gas emissions reduction and water conservation. In its entirety, the CORE Program will entail the construction of a new central heating and cooling plant, 6-story Ground Transportation Facility and a new network of roads and civil infrastructure.