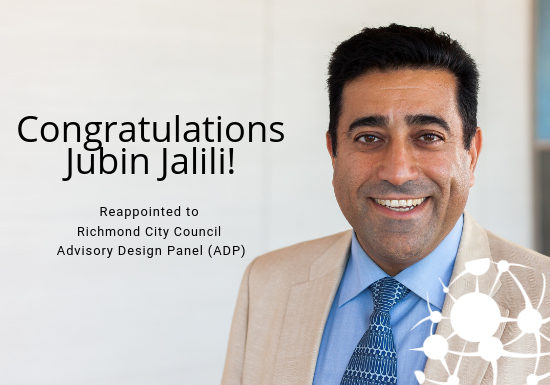 While the panel consists of eleven members from various roles within the industry, there is only one spot assigned to a professional engineer. Jubin will serve the 2019-2020 term on the ADP, making this his third term of volunteer service at the Richmond ADP.

Jubin feels honoured to have been re-elected for the role. “I was introduced to the ADP by a previous Panel member from Integral Group, Kai Chen, in December 2014 and was appointed by Engineers and Scientists British Columbia (EGBC, formerly APEGBC). Working at the ADP gives me a solid understanding of City of Richmond’s sustainability requirements and District Energy Systems that can benefit the teams that are working on projects in Richmond. Having been involved in large scale projects in town with very high sustainability features, I can make recommendations to the City planners and the design teams with respect to sustainability to keep the projects on track with City of Richmond’s sustainability goals.”