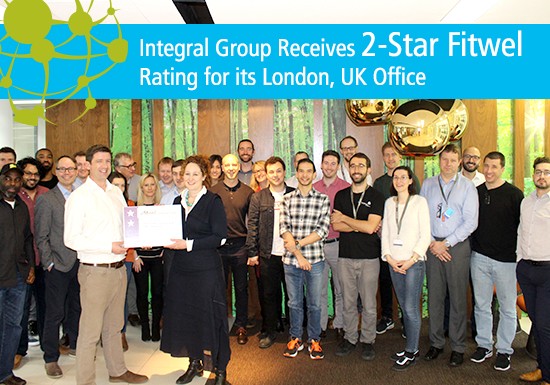 London, UK (March 31, 2017): Elementa Consulting, a member of Integral Group has certified their London, UK office under Fitwel, becoming the first Fitwel certified workplace outside of North America. Fitwel is a third-party certification system designed to help organizations enhance health, wellbeing and productivity in the workplace. Integral Group became an official Fitwel Champion only six weeks ago, and already has a dozen Fitwel Ambassadors trained on the evidence-based connection between design and health. With this capability in place, Elementa Consulting was able to quickly integrate many Fitwel inspired strategies within the London office to achieve a “2-Star” Fitwel rating. This achievement is the first step in fulfilling their commitment as a Fitwel Champion to certify four offices across the USA, UK and Canada during 2017.

Joanna Frank, Executive Director for the Center for Active Design (CfAD) presented Elementa’s Fitwel team with a “2-Star” Fitwel Certificate earlier today for their London office. The office scored 118 points out of a maximum possible 144.

“Today is an important milestone for Fitwel and Elementa,” remarked Joanna Frank. “There is a growing recognition that where we live and work has a dramatic impact on our health. By implementing Fitwel’s evidence-based strategies, Integral is leading the transformation of workplaces and demonstrating that Fitwel is an achievable goal for all. Elementa can be proud of their 2-Star Fitwel rating, a significant achievement that demonstrates a holistic approach to health.”

Integral Group’s London office is home to Elementa Consulting, a member of Integral Group. In 2016 Elementa searched for a new space to house its growing team of MEP engineers and sustainability consultants, which resulted in a move to 80 Cheapside – an eight-story, multi-tenanted building in the heart of London’s historic financial district.

This 6,000 sq. ft. space on the second floor had previously been home to insurance underwriters. True to its green credentials and belief that every Integral Group office should be a ‘Living Lab’, the decision was made to retain, reuse and repurpose 100% of the existing furniture, flooring and partitions and embark upon a wellness-oriented upgrade fit for a creative engineering consultancy firm.
Having moved into the new space, London-based Principal Edward Garrod, accepted the challenge to maximize health and happiness for staff with a budget of just £4,500.

After canvassing staff for ideas and feedback, the Integral Health team led by Garrod set about improving daylight and views by stripping away privacy film from windows, upgrading break room facilities, introducing active workstations, and installing full height panoramas of the Bay Area, Vancouver and views of forests, a hydroponic salad system and air quality monitoring systems. Meeting rooms were transformed into collaborative spaces where project teams could draw on the walls, and each space was named after a tree native to an Integral Group region. 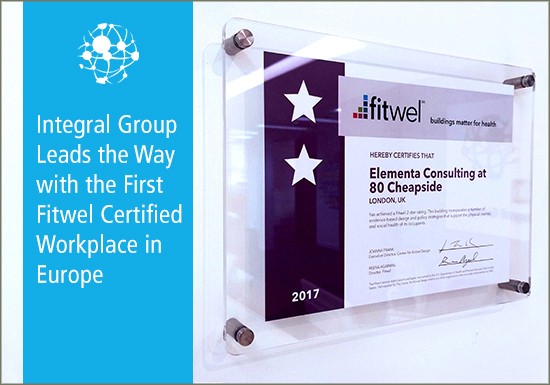 The public release of Fitwel at the end of 2016 prompted Garrod to become the first Fitwel Ambassador outside of North America. After they became a Fitwel Champion in early 2017, Garrod challenged his team to a new and compelling goal – a sprint to submit for a Fitwel rating within just six weeks.

Many Fitwel inspired measures were effortlessly implemented at little to no cost – including reorganizing desk layouts to maximize daylight and views, and encouraging creation of a staff yoga club with out-of-hours access to a multi-functional room. However, it was evident that in order to achieve a Fitwel 2-Star rating, it would require cooperation from the building’s owners, operators and fellow tenants.

“By reviewing our workplace against Fitwel’s strategies, we were able to flag areas where we could go much further – through some simple interventions and by embedding health and wellbeing commitments within our existing environmental management system. Yet to succeed we needed to go beyond our lease line and engage with the performance of the building as a whole,” explained Garrod.

This turned out to be an easy ‘sell’ as Aston Woodward, Director at Oxygen Asset Management, acting on behalf of 80 Cheapside’s owners, the Crosby Group, was quick to get on-board. He was joined shortly after by the team from Workman LLP who had recently taken on management of the building. The decision to enhance the London office helped forge a collaborative relationship with 80 Cheapside’s asset management, building manager and fellow tenants, helping to shape plans for the upgrade and refresh of the building’s common areas.

“The Crosby Group as landlord and Oxygen as their advisor see the occupational experience as a priority for their managed assets. When Elementa approached Oxygen, we were delighted to work closely together with them and understand and implement change based on the Fitwel principles,” stated Woodward.

Having achieved their six-week certification goal, Garrod is keen to stress how smooth the process was, and how simple it will be to roll out to Integral Group’s offices. “Fitwel’s platform is designed to make enhancing health and wellbeing accessible to every workspace,” said Garrod. “Uploading our evidence was quick and painless, and the third-party review by Center for Active Design was focused and fast. Based on our experience we’re already working with clients across the UK to apply Fitwel strategies to their own offices.”

Garrod is clear that achieving a Fitwel rating doesn’t mean that Integral Group’s work in London is done. He continues, “There are Fitwel strategies that we know we can achieve with more time, and new avenues that will be opened up by future upgrades to the building. By integrating ongoing Fitwel assessments as part of our management systems, we’re committing to review the progress and make continual improvements in coming years. We’re now more than a Living Lab – we’re a Healthy Living Lab.”

For the team at the Center for Active Design, the project has been a compelling demonstration of how Fitwel’s reach can extend beyond a project’s boundary. “Improving community health is a key objective for Fitwel. This project shows that approaching multi-tenanted buildings as a community, engaging that community and working collaboratively can yield impressive results,” concluded Frank.

About Fitwel
Fitwel is a cost-effective, high impact building certification system that optimizes building occupant health and productivity through targeted improvements to workplace design and operational policies. Fitwel has a vision for a healthier future where every building is enhanced to support the wellbeing of its occupants and surrounding communities. Fitwel’s development was led by the U.S. Centers for Disease Control and Prevention and the General Services Administration. The Center for Active Design is the operator of Fitwel, leading its widespread adoption and future development. Learn more at fitwel.org and follow Fitwel on Twitter @fitwel.

About Integral Group
Integral Group is a global firm of design professionals collaborating under a single deep green engineering umbrella. The organization provides a full range of building system design, energy analysis, and sustainability services with a staff widely regarded as innovative leaders in their fields. Integral has 400 members located in offices throughout North America and the UK. We are proud to distinguish ourselves from our competitors with our expertise and focus on highly energy efficient and sustainable design projects. Integral Group designs have been part of over 60 Net Zero projects, three of which are certified, 36 completed LEED Platinum Certified projects, with more than 80 LEED-registered projects, and 8 Living Building Challenge projects currently in design.