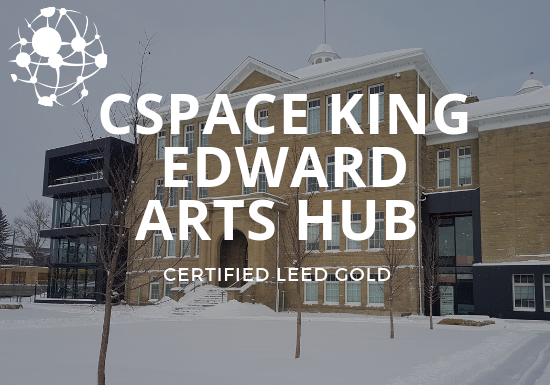 Integral Group is proud to announce that the cSPACE King Edward Arts Hub has been Certified LEED Gold as of May 2019. The project has achieved a total of 60 points on the LEED Certification rating system, with Mission Green Buildings – a new member of the Integral Group family – providing LEED consulting and sustainable design services.

cSPACE King Edward Arts Hub represents a union between century-old architecture and modern design, marrying sustainability and classic beauty through seamless engineering. The project involved the transformation of a 100-year-old sandstone school into a modern hub for arts-based groups and non-profit community charities. This was done through a renovation of the interior while preserving the façade, as well as a contemporary addition of a theatre and flexible space for community rooms and rentals to the west side of the building.

The development took many innovative steps to achieve its sustainability goals. Over 90% of the building’s existing structure was reused to lessen the project’s need for virgin building materials, and over 80% of the demolition and waste was diverted from landfill. The building also uses 66% less energy (by cost) than the MNECB 1997 reference case. The significant energy savings are achieved from efficient LED lighting, a dedicated ventilation system with heat recovery and VFD fans, condensing boilers, an air-cooled chiller and other smart mechanical design considerations. To help offset project utility costs, a rooftop photovoltaic (PV) solar array generates 10,355 kWh of electricity per year. Installation of low-flow plumbing fixtures such as new sinks, toilets, urinals, and showers contributed to reducing potable water consumption by approximately 30% compared to a traditional design.

The project is also the winner of the 2017 Mayor’s Urban Design Awards for Urban Architecture, a biennial award which acknowledges contributions of designers, architects, and artists that help improve the quality of life in Calgary through art and design. Nyhoff Architecture and cSPACE Projects were recognized for the conservation and adaptive reuse of the original King Edward School building for the new centre of creativity and arts now known as cSPACE King Edward.