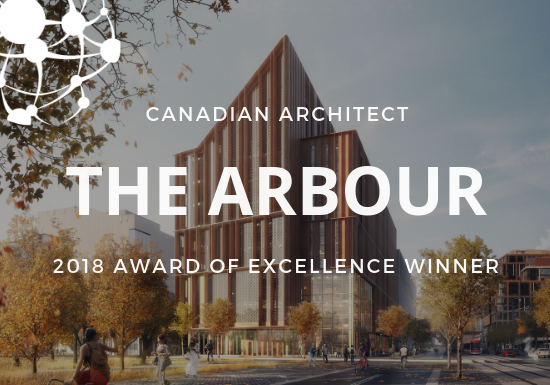 Moriyama & Teshima Architects and Acton Ostry Architects were among this year’s Award of Excellence recipients for their design of The Arbour project.  A new addition to the George Brown Campus in Toronto, Ontario, the Arbour is a state-of-the-art educational facility with innovation at the forefront of its design. The 10-story structure will revolutionize Toronto’s building landscape and become the first Tall Wood Research Institute in the country, with materials sourced nationally. A net-zero energy target has been set by George Brown College in its commitment to sustainability. The building will serve as an educational hub—housing research, teaching, and learning—as well as a child care facility to accommodate the rapidly growing local community.

Integral Group is proud to be working with Moriyama & Teshima Architects and Acton Ostry Architects on this award-winning project.