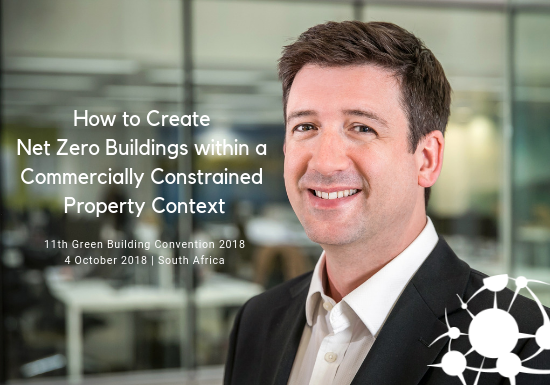 Since its launch in 2007, green building has been growing exponentially in South Africa, and it continues to do so. It took six years to certify the first 100 buildings and less than a year and a half to reach 200 in September 2016. Just over a year later, we now have more than 300 certified green buildings in South Africa.

Green Building Council of South Africa is hosting its 11th annual Green Building Convention at the Century City Conference Centre in Cape Town on 3-5 October 2018.  This year’s conference theme is The Race to Zero focusing on buildings that achieve net zero carbon emissions, as well as building the net-zero water, waste and ecological impact.

Integral Group is pleased to be represented by Principal Ed Garrod in his session:

Ed will discuss his fascinating work on some of the world’s top sustainable buildings including the award-winning zero carbon Masdar Institute in Abu Dhabi and Winspear Opera House in Dallas.

Edward Garrod is a sustainability strategist and environmental designer of award winning green projects in over twenty countries. He has a passion for design communication, translating analysis into actionable design strategies, and helping clients to develop compelling visions for their projects. Edward joined Integral Group, based in its London office, Elementa Consulting, as a Principal in 2014 having spent three years as a Partner at Foster + Partners. In 2017 his team created LETI – the London Energy Transformation Initiative that has brought together the design and construction sector in London to develop recommendations for transitioning energy policy in London towards Zero Emissions. He holds degrees in Architecture and Environmental Design from the University of Cambridge, and an MBA in Innovation and Entrepreneurship from Imperial College London. He is a LEED Accredited Professional and Europe’s first Fitwel Ambassador.