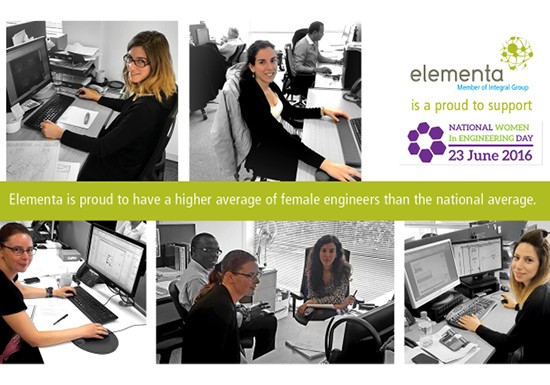 On Thursday, June 23rd, Elementa is proud to support National Women in Engineering Day (NWED), and hopes to raise awareness about the engineering industry in order attract more women into the field. An underrepresented minority in engineering, an influx of female applicants and workers could solve a variety of problems plaguing the UK sector.

NWED has been providing resources and encouraging women into engineering since 2014. It is an annual event sponsored by the Women’s Engineering society (WES). The day thrives off individual outreach and volunteers as there are no official events, only privately hosted ones by good Samaritans worldwide. Look for local events at schools, universities, and participating businesses.

This UK-centered movement to repopulate the engineering industry by drawing in more women has never been more important. According to the 2015 IET Skills Survey, the annual shortfall of right engineering skills in the UK is 55,000. This is due to various social stigmas and preconceptions, most of which are misleading or just simply false. A great deal of women still perceive engineering as manual labour or construction, while in fact the majority of engineering professions have you working at a computer all day! Partly due to these assumptions, the UK has the lowest percentage of female engineering professionals in Europe, at less than 10%. With leading European countries at 30%, there is quite a lot of room for expansion by UK women.

Bringing more women into engineering positions wouldn’t only help bandage the UK’s worker shortage, but also improve business proficiency and success across the board. Statistics show that gender diverse companies are 15% more likely to perform better than single-sex dominated workplaces. Adopting new methods of recruitment and support of female applicants would allow both the industry and those within it to thrive.

Elementa and other participating businesses hope their efforts in celebrating National Women in Engineering Day can help resolve these issues, while at the same time aiding young women who wish to pursue careers in engineering.