A Decade of Displacement Ventilation 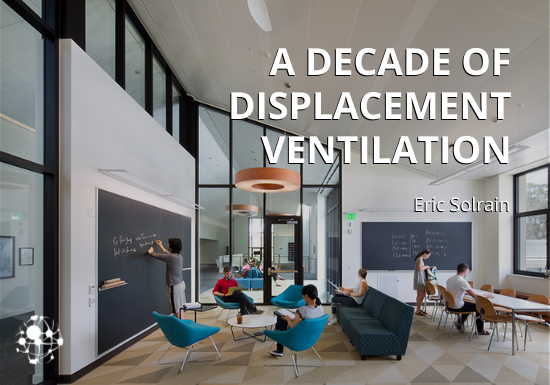 As people across the United States evaluate their return-to-office plans, companies are considering all that has been learned about aerosolized viruses and how to keep employees safe. One approach that Integral Group has been using for over a decade to improve indoor air quality and thermal comfort that may offer a holistic solution to reduce the risk of contamination is displacement ventilation. As variants of SARS-CoV2 compete with immunizations, and future coronavirus outbreaks are certain, not to mention transmission of common cold and flu, it’s clear we need to rethink our indoor environments.

“Thermal displacement ventilation, a system that’s been popular in Europe for more than 30 years but slow in adoption in the U.S., could help rid rooms of … virus particles more effectively” than a traditional mixed-ventilation system, reads a recent article in Fast Company which summarizes the system and its benefits very well.

What is Displacement Ventilation?

Displacement ventilation cools a large space with low energy use, making it a sustainable and financially desirable option. Cool, fresh air is introduced into a space near the floor, pushing the warmer air up. The warm “waste” air then stratifies near the ceiling and is removed, either passively or via low-energy powered ventilation.

This mode of ventilation is also a very healthy option, as the Fast Company article describes well:

As the cool air circulates around knee height, it naturally finds heat sources—principally human bodies—and creates “thermal plumes” around those objects. As that air warms, it rises around each individual, giving every individual a “personal chimney” of fresh air. As it then passes up around people’s noses and mouths, the warm air picks up pollutant particles along the way and carries them out through the ceiling exhaust.

Because of that stratified system, whereby warmer, polluted air stays at the very top level of the room, away from people, multiple studies and reports have suggested that, if designed properly, thermal displacement has the potential to be more effective in preventing exposure to airborne particles than in the traditional setup, including studies that have considered SARS-CoV-2 specifically.

Celebrating a Decade of Displacement Ventilation

As a technology, displacement ventilation has been used for decades in the United Kingdom and Europe but is still considered a newer ventilation tactic in the United States. Even now, twelve years into Integral Group’s consistent use of the technology, displacement ventilation is a foreign concept to many of our clients. We have endeavored to encourage its adoption in a variety of project types, starting with retrofitting two historic piers in San Francisco for cultural projects, to now designing it for a one-million-square-foot ground-up corporate campus for one of the largest technology companies in the world.

One of the first environments in the US where displacement ventilation became common is in “rake seating,” aka theaters. Displacement ventilation was used to attract people — is the weather hot? “Your seat is cooled, individually for you!” Have you ever sat in a movie theater and felt a slow, cool stream of air blowing against the back of your ankles or up the nape of your neck? Those are displacement diffusers, blowing fresh cool air in at a low level to push the “waste” air up to the ceiling.

The north portion of the historic Pier 2, a former warehouse, became the 437-seat Cowell Theater. To account for such a high number of occupants at once, Integral Group designed displacement ventilation to bring in cool air through a plenum under the seating using in-floor diffusers. The air is warmed by the crowds and the lighting as it rises and is exhausted out of vents placed throughout the ceiling. This climate-control system reduces energy use while increasing occupant comfort and system reliability at the entertainment venues. Because of the displacement diffusers in the floor and under seating, it is also easy to maintain the aesthetics of the historic pier.

As Integral was diving into the renovation of Pier 2, Pier 13 was also being redeveloped as the new home of San Francisco’s beloved science museum, the Exploratorium. The existing conditions of the pier warehouse presented a poor existing envelope. To work with this, a radiant slab was installed over the existing floor. The displacement system drops tempered air onto the floor from overhead, keeping the fresher air close to the floor. The radiant system provides both heating and cooling to keep the Exploratorium comfortable year-round while ensuring that both warm and cool air is always present in the space – critical for displacement ventilation to work.

The museum was designed with a goal to be the largest zero-energy museum in the United States, utilizing solar panels to offset any energy needed by the facility. The low energy use of the displacement ventilation system contributes to this goal, counteracting the high energy demands of the exhibits. 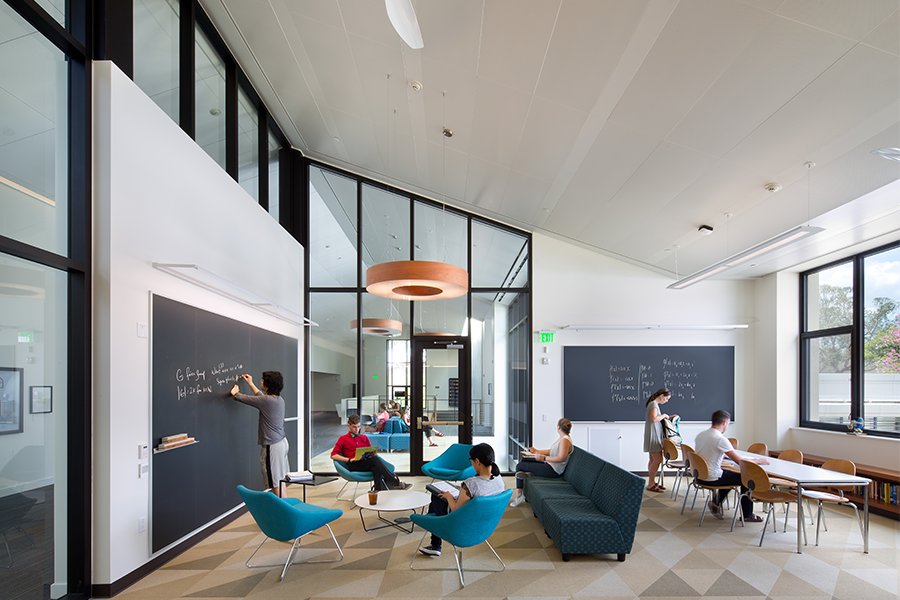 Integral was contracted in 2012 to help Pomona College significantly renovate the Estella Laboratory, which was originally built in 1958. Teaching and specialized labs were upgraded and expanded, and the building also includes amphitheater-style classrooms and student lounge spaces.

The project was recognized with a Livable Building Award Honorable Mention in 2018. The Livable Building Awards is a program by UC Berkeley’s Center for the Built Environment which showcases projects that excel in design, operation, air quality, and occupant thermal comfort. The finalists for this award must meet minimum criteria set by CBE’s Occupant Indoor Environment Quality Survey, which has been used to study occupant indoor environment comfort in over 1,000 buildings worldwide, in addition to meeting the highest standards in sustainability and overall design. The results of the occupant survey for the Estella project revealed that the thermal comfort of the occupants in the Estella building is exceptionally high: 84% of the occupants reported that they were satisfied, a satisfaction rate much higher than the full study sample dataset overall. 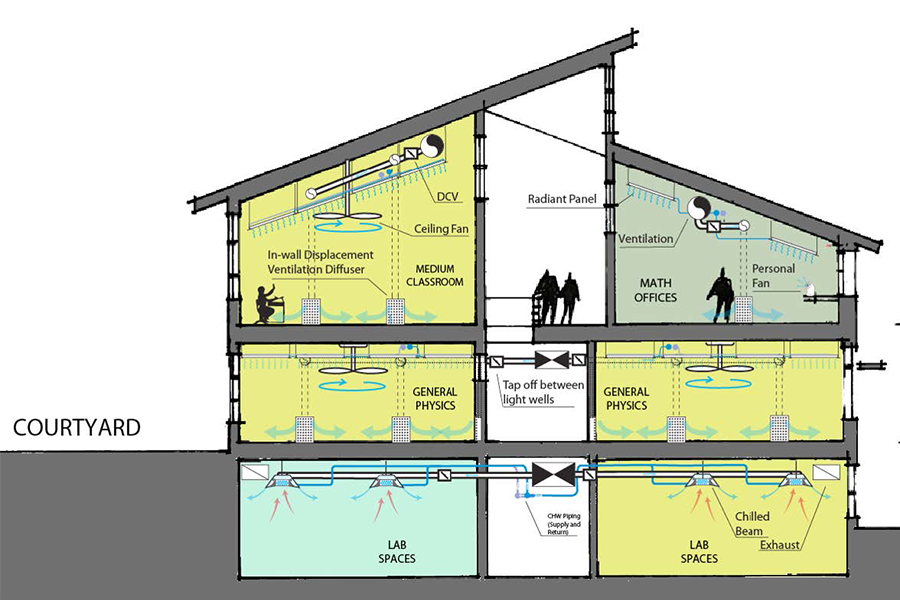 By the time Integral was contracted by a large technology firm for their new one-million-square-foot office project in early 2016, displacement ventilation was proven successful (and celebrated!) in warehouse-style buildings and classroom buildings. But what about offices?

Luckily, the design scheme of this office building was multiple floors housed within a large structure, and the client was open to us taking the time to go through modeling and studies to validate this ventilation approach in office space. The team went so far as to work directly with the diffuser manufacturer, testing products in their manufacturing facility in Canada.

Integral performed exhaustive modeling and designed a displacement ventilation system that will work on the multiple floors of this office. The client has since decided to also move forward with this concept to their next large office project.

In 2020 Integral was hired to provide MEP services for the tenant improvement phase of a 420,000 square foot office building near San Francisco. The core and shell of the building were already well underway when we started to design and included standard VAV reheat with mixed-air diffusers. Based on our previous experience and modeling, our design team convinced the owner to convert the design to displacement ventilation, making the first build-out of the tenant improvement into what is technically a retrofit of the core and shell systems.

With the recent focus on spaces that are not just sustainable but are also healthy, the hope is for the adoption of displacement ventilation in the US to continue. Along with technologies like radiant and chilled beams, Integral will endeavor to take the best of its global experience and put a Bay Area spin on it. The goal is to perfect it and share it with the rest of the world.

Interested in learning more about displacement ventilation?  Reach out to Eric Solrain here.