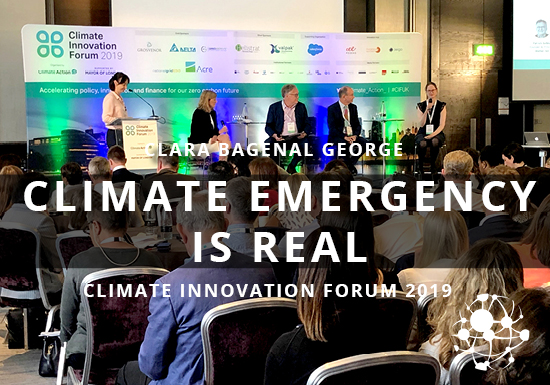 The built environment must prevent rising carbon fast as climate emergency is declared.

Today a BBC news headline declared “The UK has been dealt a ‘brutal reality check’ on its climate change ambitions” from environmentalists. The story highlights that the government’s official climate change advisers are warning ministers that they are failing to cut emissions fast enough and adapt to rising temperatures. This comes after the recent declaration of the UK climate change emergency, to which there is a very limited amount of time to change our ways globally before global heating takes a disastrous impact on the planet.

If you were at the Climate Innovation Forum last week, you may have caught our very own Clara Bagenal George alongside other experts in a panel session where they discussed the topic of ‘Deep carbonisation of the built environment’. Christina Gambao, CEO of WGBC, Patrick Bellew of Atelier Ten, Tom Delay from Carbon Trust, Joanne Patrick from the Mayor’s Energy Efficiency alongside Clara were all in agreement as to the importance of changing the way the built environment is structured to prevent rising carbon; but also in agreement that it is entirely possible and affordable to do so.

The discussions centred around the growing net zero building movement and whilst it is making small steps into the spotlight, the fact remains that still many buildings constructed are not designed with net zero carbon goals in mind. If governments or city officials don’t legislate the requirements for building limits of carbon output, then we are left with the reality that many companies opt for the financially cheaper option which has a far greater negative impact on the environment. The argument was made that there is actually no trade off in financial returns and environmental performance. Ultimately, over the long term, environmentally focused buildings do better than buildings built with traditional building standards. But it all comes down to power, who has the power to enact change and will they do it in time to turn the tide on our climate crisis?

The Climate Emergency is real. RIBA has stated there is only 11 years left to agree and implement a net zero carbon trajectory for new and retrofitted buildings, and infrastructure. The construction industry must come together immediately, collaborate and make decisions soon to ensure that global heating does not continue to rise at its current pace. The London Energy Transformation Initiative (LETI) is one forum founded by Elementa’s Clara Bagenal George, where cross-sector collaboration is influencing future policy to map London on a path to net zero by 2030. If you have strong views on how to make net zero a reality, we need you. Join forces with LETI and become part of the solution to this urgent crisis. More information on LETI and how to get involved at www.leti.london.